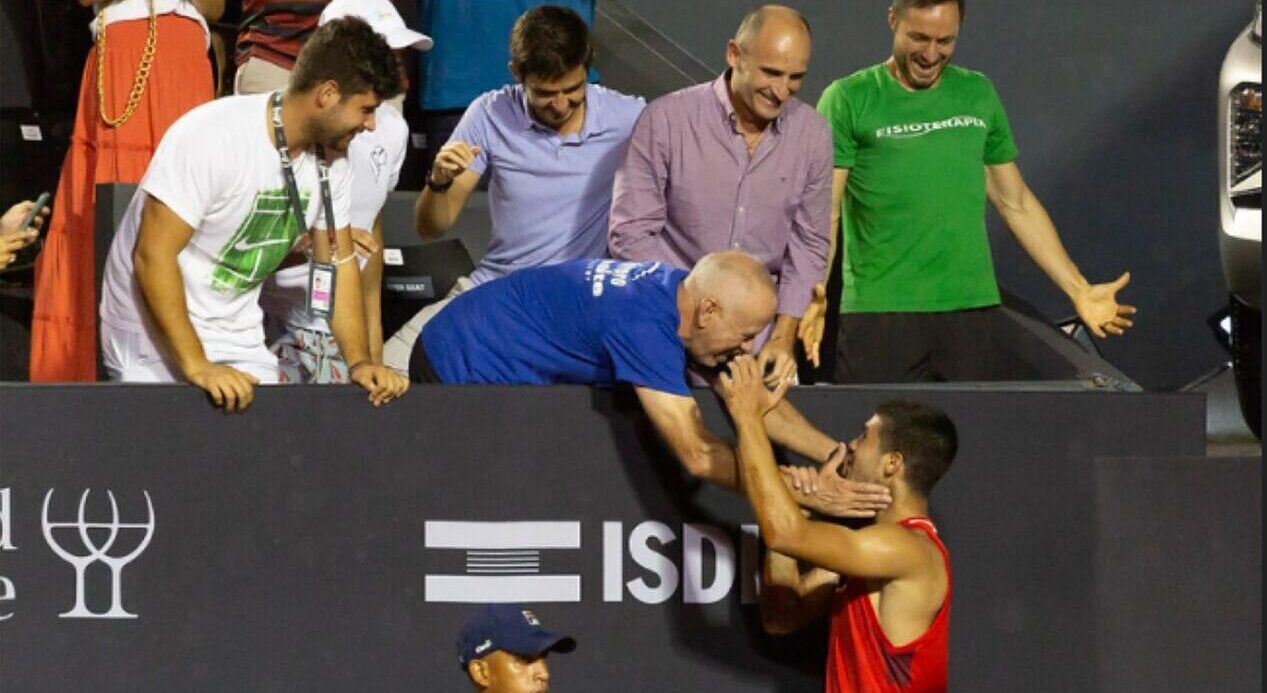 THE “DANGER” DIMITROV AND THE WISDOM OF UNDERSTANDING NADAL: MARTÍNEZ CASCALES AND THE SECRETS OF THE “ALCARAZ WORLD”.

PARIS – “I have to retire, I have already told Juan Carlos. But he won’t listen to me”.

The one who wants to retire (although he is not serious) is Antonio Martínez Cascales. And Juan Carlos is Ferrero, the player that Martínez Cascales took in 2003 to number one in the world, the same Ferrero who today directs the career of the most vibrant player on the circuit, Carlos Alcaraz.

Martinez Cascales is 64 years old and has the same bald head he has had for decades. Yes, a good age to retire. But it is impossible. He not only loves tennis, but he’s also no fool. And you’d have to be a fool to hang up your racket precisely when an Alcaraz crosses your path.

“Today, I’m the coach’s coach. When Juan Carlos wants to rest for a few weeks, Carlos will go with me. I went to Brazil as coach and I’m scheduled to go to Queen’s as well. It’s easy to travel with him…”, Martínez Cascales explained to CLAY.

First it was Ferrero, now it’s Alcaraz. Is Cascales touched by the magic wand?

“Having two stories like this, you certainly don’t expect it. It’s true that a few years ago we had a student in whom we had great confidence, Nicola Kuhn, a German who was born in Austria but lived all his life in Spain. We had him for five years, but he went bankrupt. He was very, very promising, he was with us from 12 to 17. Things happen, sometimes the wrong decisions are made…”

Kuhn’s bid failed, another young man showed up at Equelite Academy, in Villena, near the Spanish city of Alicante.

“Kuhn left and a year later this guy, Carlos Alcaraz, showed up. It was the summer of 2017 and I immediately saw that he had great talent, although, obviously at 14 years old he was messy, and with a technically bad serve.”

Alcaraz is also a man of luck, because that messy serve five years ago is today one of the keys to his game.

“Juan Carlos became obsessed with the fact that he had to change that serve, he did a lot of tests. He has improved a lot, he is serving very well the two open serves. He just needs more continuity with his serve in hard court matches”.

In the inevitable comparison with Rafael Nadal, Alcaraz takes advantage in that aspect, because the serve is not precisely the best virtue of the winner of 21 Grand Slam titles.

Does Alcaraz serve better than Nadal?

“Yes, yes,” concedes Cascales. “And I think in a year he’s going to get a very reliable serve.”

What did the man who took Ferrero to the top see on the day of Alcaraz’s first training session in Villena?

“I was excited from the beginning, although you have to be cautious, no matter how good the kid is. This kid was doing different things and he really, really likes tennis. He is a hard worker and very grateful on the court. That’s what Juan Carlos appreciated the most, the only one he trained before was (Alexander) Zverev for seven or eight months”

Ferrero must have seen something very special in Alcaraz that summer day in 2017.There were many who asked him to coach them, and he kept turning them all down: no one made him feel what Alcaraz made him feel.

“And that I was telling him that Thiem was asking him to train him for only 15 weeks, and that this was compatible with taking a 15-year-old boy, who could even serve as a sparring partner. But Juan Carlos said no, no, no, he wanted to be with Carlos alone…”.

Ferrero is still in great physical and tennis shape, necessary to keep up with an Alcaraz with all the strength of a “teenager”.

“Carlos is humble, every time he finishes a training session he thanks you. And when I’m on the court, even if I didn’t get in, he also thanks you. He understands a lot about tennis, his father also knows tennis. And since he’s with Juan Carlos he’s been a father, not a coach. Before he was a coach in the shadows”.

The young Alcaraz (“Carlitos”, he would say) lived in his house in El Palmar, in Murcia, 15 kilometers from the academy. He would come and go, because he had to study. Until, on his way to turning 16, Cascales and Ferrero told his parents that they needed him full time at the academy, that he should live there.

“More than anything to have it more under control. The friends are good people, but they are not focused on tennis. We didn’t want weekends and parties to influence.”

No sooner said than done. Alcaraz is even more committed to his training. The results started to come.

“And at the tennis level it’s clear that he has enormous talent. I was impressed the first time I saw Grigor Dimitrov play. And more than once I have given Carlos that example.

What example? “It’s true that Dimitrov won a Masters playing perfectly, but he hasn’t been as good as I thought he was going to be, he has lacked maybe a little bit more focus. Surely he has worked a lot, but if he had worked a little harder maybe he would be better, and that example I gave Carlos: ‘You play very well, but not better than Dimitrov at 17’. It’s something I did also to motivate him.”

The truth is that, at the same time that he mentioned the example of Dimitrov, Cascales lived from astonishment to astonishment with Alcaraz.

“I would go to see the training sessions, and always, in each one, I saw something exceptional, an unthinkable blow. I had never seen this with anyone. It was worth spending two hours there, you saw things from another world.”

The similarities with Rafael Nadal’s explosion in 2005 are evident, Cascales has no doubts.

“Nadal’s paradigm is clear in all this. And unfortunately kids are often wrongly impregnated with that paradigm. You see children of 13, 14, 15 years old and you see them celebrate the point like Nadal, but when it’s not their turn. On the other hand, Carlos has interpreted it well, he celebrates when it’s his turn, like Nadal. He has grown up seeing this, but without someone telling him, maybe he wouldn’t have interpreted it well either”.

Every now and then, Cascales and Ferrero have discussions about the speed at which Alcaraz is evolving. 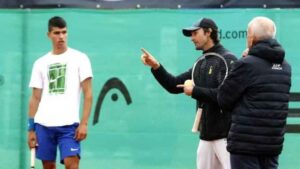 “Juan Carlos is transmitting tranquility and serenity in everything, but also on the track. We are trying to get him to the right speed. I’ve talked to Juan Carlos about it: let’s not cut him off, I tell him, he’s going too fast, Juan Carlos tells me”.

“Juan Carlos has always held him back a bit, and if there hadn’t been a pandemic he would have gone even faster, he had wild cards in five very important tournaments in 2020”.

Cascales is confident in what Alcaraz can do at Wimbledon.

“I see him well for grass. He likes it. With his game of very straight shots, the forehand slice and backhand slice he hits without a problem. And he’s coming up with his second serve. Also, something important: on grass he pays a lot for improvisation, and Carlos has the talent to improvise”.

But first there is Roland Garros, of course. Alcaraz champion?

“He already told us: I’m number six, there are five more favorites than me. But of course he can, although it’s very difficult.”