INTERVIEW WITH MARTINA NAVRATILOVA: EXPECTS NAOMI OSAKA TO OVERCOME AND PLAY WIMBLEDON “ENJOYING AND EMBRACING IT”

PARIS – When you talk to Martina Navratilova one thing is clear before the conversation starts: the answers will be direct, sharp. The nine-time Wimbledon champion speaks as she used to play, taking the net and without fear of risk. Nor when she refers to Naomi Osaka, the axis of a highly sensitive debate on the circuit.

“I hope that she’ll play Wimbledon and that she will enjoy it, and really embrace it,” Navratilova, 65, told CLAY during a meeting in Paris on the sidelines of the French Open. The tennis legend also believes that Iga Swiatek is playing so well that she has almost forgotten what it’s like to lose. And that Carlos Acaraz is a new dimension in tennis.

– When you see Iga Swiatek, what do you see?

– She’s dominating and it’s great. She’s playing great tennis. Once you get on that winning streak it is easier to stay there than to get there. You almost forget how to lose. Good things kind of accumulate in a good way. I think het partnership with Thomas Wiktorovsky and also, her psychologist has been helping.  She’s in a good space.  She gives everything to the sport.  She gives everything on the court but then she disconnects, and she does her own thing. And I think that’s important, that you don’t live with it 24 hours a day.

– I think, so you stay fresh. Give it 100% when you’re on the court. Quality over quantity and then you let go and then do something else. Take the pressure of that way. She seems to thoroughly enjoy the competition. And I think that’s also key because I’ve seen a lot of people get so nervous about playing, about winning, they think about winning rather than playing the game. And they get too nervous, and she seems to be just totally in the moment, even the way she walks she’s ready for the next point. 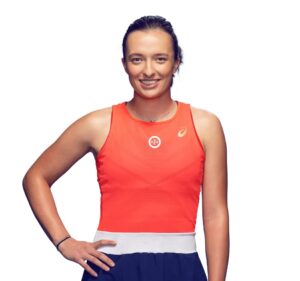 – That brings us to the case of Naomi Osaka. She’s been talking about the mental health problems. What do you think about this? Because when you were playing, you also dealt with big situations, leaving Czechoslovakia, building a new life….

– I don’t think you can compare what I went through to what they are going through.

– No. Everybody’s got their own issues. It’s how you deal with it that matters. These days they get a lot of help on how to handle all these situations so I hope that she’ll play Wimbledon and that she will enjoy it and really. Embrace it.

– Nine-time Wimbledon Champion. Would you have played Wimbledon without WTA points?

– Yes. It was about playing there. I didn’t even know what the points were, so it didn’t really matter. When I won the first time I also became number one, I didn’t even know that was going to happen, so it was just a bonus when that happened. So, you play for the titles, and if you win enough you get to number 1. So, I never really looked at the ranking. But I had the luxury of not looking at the ranking. If you are one you are seeded at the top, if you are two you are seeded at the bottom, and that was the case for me for many many years. You don’t really think about it. But for the players that are maybe on the bottom, to get seeded or get into the tournaments, of course it matters. But once you are playing the match, it’s all about playing the match, competing and not points.

– Carlos Alcaraz, the Spanish player. What did you think when you saw him playing at this Roland Garros?

– Amazing. He’s the whole package, he’s got it all. Fun to watch, he loves to compete obviously, he’s not thinking about tomorrow or yesterday, he’s right there. And I think Rafa Nadal has affected a lot of the players coming up. People have seen him play many many years, many many times, they’ve been exposed to that, and I think it’s kind of washed into this new generation. You can really see that they are much more mentally together. They’re like the finished package when they first come on the tour. Because they’ve seen it for decades so it’s a little bit easier to follow that path, I think.

– Roger Federer, is he coming back to Basel to say goodbye or to come back?
– I hope so. I know nothing about his body but of course we all want to see him back. We’ll see if the body agrees.

– It’s important to them. Right now, it is. Absolutely. One of them will have more than the others. Probably. Fighting for it at the same time, going for history, going against each other for history. I think they are pushing each other into amazing spaces. It’s unbelievable that we are part of it in this day and age.