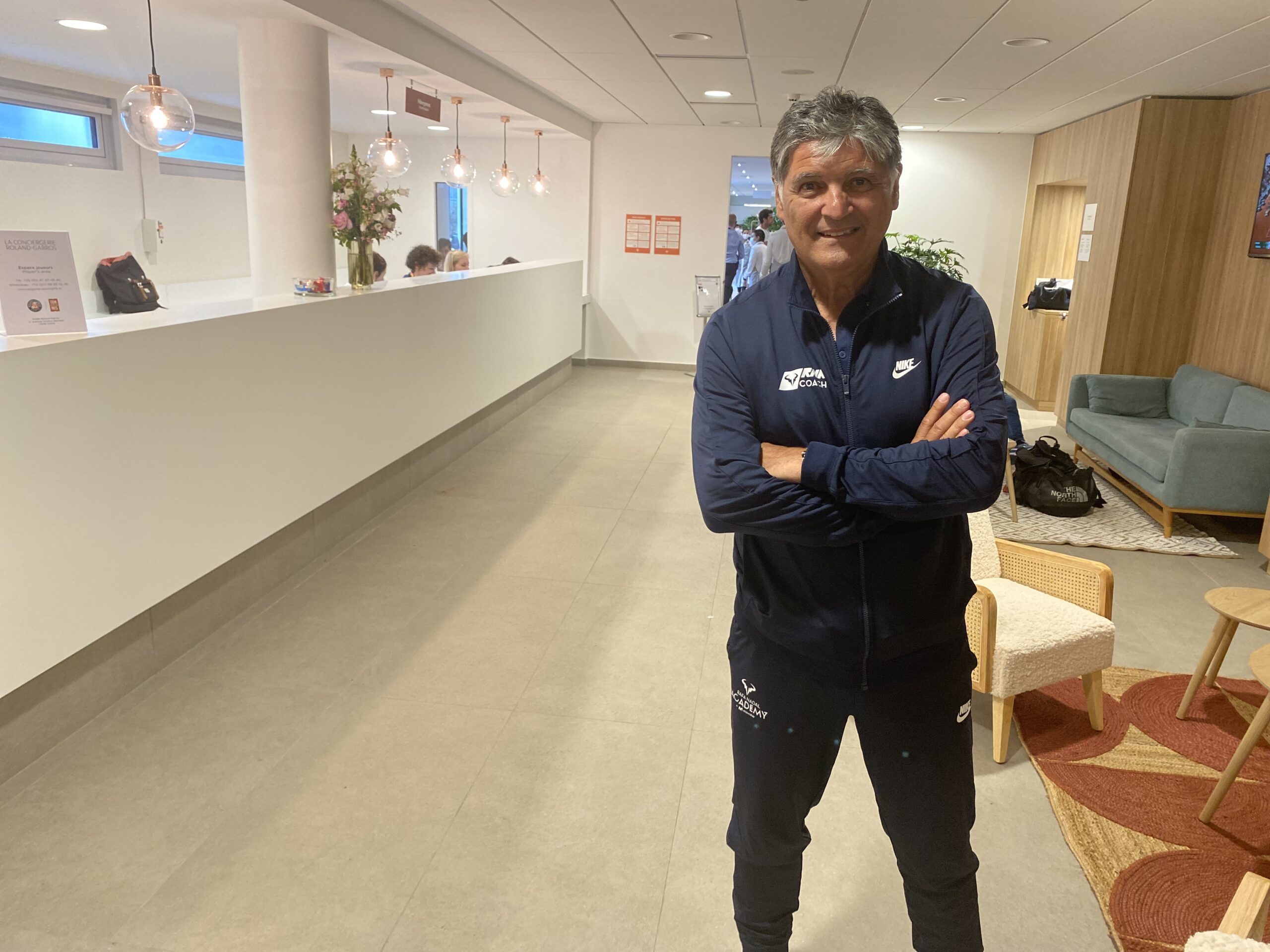 INTERVIEW WITH TONI NADAL – THE DAY HE TOLD RAFAEL “I’M LEAVING”, WHY HIS NEPHEW COULD HAVE 28 GRAND SLAM TITLES AND THE CERTAINTY THAT FEDERER IS COMING BACK TO PLAY IN 2023 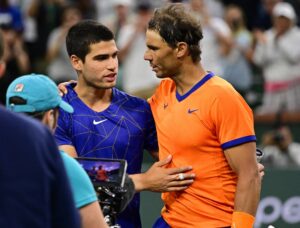 Photo – Rafael Nadal greets Carlos Alcaraz after defeating him in the semifinals of Indian Wells 2022 / Jayne Kamin-Oncea-USA TODAY Sports
How is it possible for Spain to do it again? In January, Nadal wins Australia, and now this.
– There is an imitation effect. Emilio Sánchez Vicario, Brugera, Corretja, Moyá, Ferrero, Ferrer, Feliciano, Rafael… People used to get on each other’s nerves. For Alcaraz, seeing Rafael winning for so many years and what he did… It makes you think that you can do it too.
You recently said in a column for “El País” that Roland Garros has become a colder tournament. Why?
– Nowadays we tend to keep everything in order. When you tidy everything up, in the end, it’s colder. Talking to journalists in this tournament is now more complicated. Before we used to arrange everything without problems, now we have to find a space. We tend to regulate everything excessively.
How long are you staying in Paris?
– I’m staying until my player loses.
It could be for two weeks…
– It’s looking complicated, Auger-Aliassime would have to beat my nephew.
And what will you do this Sunday?
– I won’t go to the court.
But would you continue to advise him?
– No, man no. I wouldn’t tell him anything to beat my nephew. I already told him: I’m not going to tell him if my nephew has this or that. Above all, I am Rafael’s uncle, I have been with Rafael for many years, I work for Rafael in the academy. And even if I didn’t work for Rafael, he is my nephew. I’m not going to go and tell the other one what to do to beat him.
So this was discussed with Auger-Aliassime?
– Of course, of course. He accepted it. That’s normal. As a matter of ethics, I wouldn’t tell my nephew what he has to do to win. And there’s no need either, he has his trainer. It’s an unusual situation. Whoever wins will be fine with me.
What do you think about banning Russian and Belarusian players at Wimbledon and the removal of points by the ATP and WTA?
– It seems wrong to me; they should have looked for another solution. By taking away the points you hurt a group of players who play well on grass.
Have they turned Wimbledon into an exhibition?
– No, they haven’t turned it into an exhibition. Whoever wins Wimbledon will have one more Grand Slam. All the others, if you take away the points, are an exhibition. But Wimbledon, no. Is there going to be anybody who doesn’t go to Wimbledon because they took away the points? The top seeds I think are all going to go. And I don’t think the Wimbledon measure is good either. What do you want Rublev to do, who has taken a stand against the war? Why is it his fault that Putin is there? It is as if Manolo Santana had not been allowed to play because Franco was there. I understand the boycott against the oligarchs because they support the regime. But against a regular citizen… On top of the fact that I have to put up with Putin, you’re pissing me off…
There are people who argue that Nadal’s 21 Grand Slam titles are worth less than Djokovic’s 20, because they are less wide-ranging because there are too many Roland Garros in that count. What do you think about that argument?
– There are opinions for all tastes, and maybe if you think that three of the four Grand Slams are played on fast courts and one on clay, maybe Rafael has been able to double them in value. Perez Reverte said: let’s not discuss emotions, let’s discuss arguments. If instead of one Grand Slam on slow courts there were two, and two on fast courts, maybe Rafael would have 28. If my nephew had not been injured and stopped participating in 14 Grand Slam tournaments, then maybe he would have, according to the proportion that he wins one in three, maybe he would have five more. Everyone can think about what they want.
Federer’s return to Basel, is it a return to the circuit or a farewell?
– I hope it’s a return, I would like Federer to have the opportunity to say goodbye in the four Grand Slams, he has been great enough for tennis to pay tribute to him and leave through the big door. I am not in his shoes, I do not know his reality, but what I know for sure is that he likes tennis very much and that he still wants to have the illusion of continuing to compete. 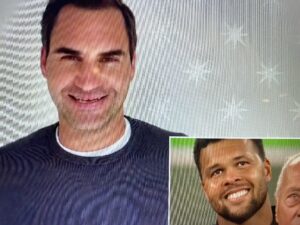 Do you see him playing in 2023?
– It all depends on how he recovers from his injury; he will already be 41 or 42 years old. And 42 is a lot of years to go after the ball, although he has a game of tennis that plays a lot of fast games, with little physical violence, this can help him.
The conversation is interrupted by Rafael Nadal himself. Polite, he greets the journalist and moves on. Then Carlos Moya. The same thing happens, both walk behind Toni Nadal’s back, and there is no contact between them. They do see each other more than once a day.
Does this mean that in 2023 everything will remain the same, with Nadal, Federer and Djokovic as protagonists?
– The renewal will necessarily come; people eventually have their expiration. But you see the intensity with which Rafael was moving a few years ago and now you see that he is moving much less, but still winning. The normal thing is that the new generations surpass the old ones. The extraordinary thing is that this is not happening. They say technology, and this, and that. Mark Spitz, with his seven golds, had his records beaten in the following Games. The one who comes after knows where the others start from and that he has to do something more to surpass them. We have come across different generations of people who have not done something more to beat the previous generations. Last year Djokovic won three Grand Slams!

– I have my opinion, but I’m not going to say it.
Maybe it’s that the old ones were too good and the next generation was not so good?
– The new generation has to surpass the previous one. Unless there is an extraordinary record like Bob Beamon’s or Javier Sotomayor’s, who took too much advantage. Sampras served very strong but the following ones have been serving stronger and stronger. When we arrived on the circuit, the second serve was served at 150, 160 kilometres per hour. This generation serves 180, 190.
There is a skipped generation, then.
– That’s why the dominance of these guys has been so long because they have not managed to overcome them. But the normal thing would have been otherwise. Federer dominates the circuit and surpasses Hewitt, Rodick. He plays two or three years easily. But then Rafael arrives and hits him harder, he has to change. He was used to the speed of Hewitt and Roddick, and then Rafael, Djokovic, Del Potro come o to the scene and force him to do other things. This intermediate generation did not manage to complicate them. Although Medvedev and Thiem won the US Open. If Tsitsipas had won in 2021 at Roland Garros… But it takes more. There is a mathematical reality, Borg, Connors and McEnroe won 26 Grand Slams. Djokovic, Federer and Rafael won 61. McEnroe was up from 79 to 84/85, Borg was up six or seven years, Connors a decade, 73 to 82/83. Federer won the last one in 2018 and the first one in 2003, Rafel won the first one in 2005 and 17 years later he won Australia.
Can Alcaraz then be the one to re-establish the succession order?
– Yes, he can. He hits even harder.
How do you see Djokovic?
– I still see him the same. I imagine the motivation is to win more Grand Slams than the others. When they have done everything they have done, in the end, what you are left with is history. Although it is difficult to say who was the best in history, the one who won more titles or the one who has played better for a while. Who would be the best, the one who has 21 Grand Slams or the one who wins 12 in three years? And it is not the same to compete with Djokovic and Federer as to compete with I don’t know who.
Si estás leyendo esto es porque te gusta el tenis y disfrutas con el periodismo que hacemos. Si puedes y quieres colaborar, invítanos un KOFI para que podamos seguir contando las mejores #HistoriasDeTenis por el mundo.