Nadal is owed something, but he may never get it

Rafael Nadal’s life was, in that respect, rather dull and disappointing.

Shanghai, London and Torino. The Masters, which is his name even though every now and then the ATP insists on renaming it, was neither kind nor generous to the most successful player in the history of tennis.

Only three cities and always the same: fast surface and indoors, the least favourable combination for the Spaniard’s interests at the lowest point of his tennis performance: the final stretch of the season.

Since he qualified for the first time in 2005, Nadal has never failed the Masters, he has always been there. It was the Masters that failed him: just two finals and no title. No wonder that throughout his career the Spaniard has raised a debate: why always in the same conditions, why never a Masters outdoors and on cement or clay?

In other eras, even in the years just before Nadal made his professional debut, the Masters was played every now and then in these conditions: outdoors, either on grass, as in the 1970s, or on concrete or clay, in later years. The latest example was Houston.

His uncle and former coach, Toni Nadal, said days ago he hoped the 36-year-old former number one would have “a couple more years” on the tour. Enough time to finish that unfinished business? On Tuesday, after losing 6-3, 6-4 to Canadian Felix Auger-Aliassime, Nadal explained why his level is not what it was in the first part of the year and is on the verge of elimination in Turin.

It was Nadal’s first loss to Auger-Aliassime, who is co-coached by Toni Nadal, his uncle and coach most of his life. 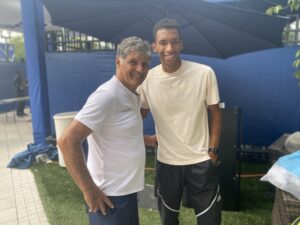 “It’s been super difficult months in every way. In the end, I have an age and the problems have been recurring,” said the world number two, who on 8 October became a father for the first time after an extremely complicated pregnancy of Maria Francisca, his wife.

It is understandable, then, that the “injustice” of the Masters no longer generates, most likely, the same adrenaline as it did ten or 15 years ago. In those days, the Spaniard would open up from time to time and, between annoyed and rebellious, he would ask the following question: why do I have to accept being at a disadvantage, why is this tournament tailor-made for certain players?

Part of the public fight he had with Roger Federer between late 2011 and early 2012 had to do with that, with different ways of seeing the circuit. Those were the years when Nadal said “we are not friends”, and explained that his friends were his lifelong friends in Mallorca.

Today Nadal and the retired Federer are friends, the Masters is still conceived as he lived – and suffered – since he qualified for it for the first time, and the time of his career is running out. Two years, says Uncle Toni. Will he make it?

Nadal promises he will at least try: “If I’m here it’s because I’m motivated. Next year the motivation and the illusion will be there (…). This is sport and you have to know how to navigate within the restlessness; this is about confidence, moments, tennis quality. And these two matches have not been a disaster. What I have to do now is come back, work hard and stay positive every day; accept the challenge and suffer a little more than I have to”.