The biggest taboo in tennis? Probably

This is what happened: during the US Open, in an interview of the two CLAY editors with Nadia Podoroska, the Argentine tennis player mentioned her girlfriend.

It was a very relaxed and natural conversation. As if we were comfortable in our living room or sitting on a blanket in the park, even though we were in New York, surrounded by tennis players, journalists and spectators.

After the interview, we two editors agreed: we were not sure whether or not this was the first time Podoroska had spoken publicly about her sexual choice.

Shortly afterwards we confirmed it: there was no information about it.

We then met with Podoroska again.

– When we talked, you mentioned your girlfriend. It’s striking, because it’s the first time you’ve spoken about it publicly.

– Uuuhh, you’re right. It’s just that because the conversation went so smoothly, I didn’t notice.

– We wanted to confirm if you’re ready to talk about it and if you’re willing to go deeper into the subject.

Podoroska asked us for some time to think about it and reflect on it with her circle. She didn’t want to go deeper, but she was happy that her girlfriend was mentioned in the conversation, as it happened and was published.

Then, the publication of the interview coincided with the time when Podoroska greeted her girlfriend Guillermina Naya (also an Argentine tennis player) on Instagram on her birthday: “Today I celebrate you from afar, but I feel you by my side every day of my life”.

And the power of the social media made the news explode. Billie Jean King congratulated her on Twitter and the topic gained momentum. “Living authentically takes such courage, but it’s always worth it,” wrote one of the most important icons in the history of the fight for equality and minority rights in sport. Podoroska replied gratefully. 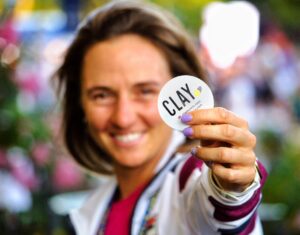 Nadia Podoroska, during her interview with CLAY in New York / SEBASTIÁN VARELA NAHMÍAS

It is women who have forged the path for sexual minorities in tennis. King and Martina Navratilova came out of the wardrobe in 1981, when no one else had yet done so.

Others such as Amelie Mauresmo, Samantha Stosur and Rennae Stubbs have been open about their homosexuality.

This year, Russia’s Daria Kasaktina opened up about her bisexuality and introduced her girlfriend: “In Russia this kind of thing is met with a lot of negativity. I think many athletes are afraid: afraid of reprisals, afraid of losing sponsors. There can be many reasons, but those who confess are doing well, so why hide your true self,” she told Russian media outlet Sports Interview.

There are those who argue, with arguments, that a person’s sexual choice, famous or not, should not be news.

Others believe that this vision is that of a utopia, of a world where discrimination does not exist, where equal marriage is recognised everywhere, where gays are not lynched for holding hands in the street, where some politicians do not stigmatise sexual minorities.

That is why we at CLAY believe that Podoroska’s words are to be celebrated: she dares to make transparent something that not everyone does, he takes on a reality of many. That is why it is news in CLAY, that is why countless Argentinean and international media replicated our interview.

What we do know is that as of today, October 2022, no leading male tennis player has acknowledged his liking for men. Football, in that sense, is a slight step ahead of the sport of racquetball.

Slightly. We are talking about probably the biggest taboo in tennis and in sport.