The tennis of the last four decades would be different without Nick Bollettieri, who died on December 4th 2022 at the age of 91.

When it came to having a conversation about tennis, Bollettieri was one of the most interesting people you could meet. He knew a lot, a great deal, but he also talked about it with passion and joy.

This unpublished interview was conducted in February 2019 in Rio de Janeiro during the Rio Open.

The American needed just one sentence to understand the secret of his success: “Age is numbers, just numbers. To me, I’m a young guy”.

“Del Potro is like the Statue of Liberty!” he said during a stretch of the interview at the Brazilian tournament. The conversation was a true review of tennis in the ’80s and ’90s, his most influential eras. In the interview, Bollettieri revealed some of the secrets of the formula that allowed him to bring success to so many players, from Andre Agassi and Anna Kournikova to Marcelo Rios and Boris Becker, through Jim Courier, Monica Seles, Maria Sharapova or the Williams sisters.

The eternally tanned Nick made a joke about the strong Brazilian heat: “I was in the sun for ten minutes and I had to leave… It’s the first time in my life!

– The tennis world is wondering: What is Bollettieri doing, why is he still working at his 80’s?

– If you paid all the bills I have to pay, you’d still be working… (laughs) Why? Because age is numbers, just numbers. For me, I’m a young guy. I love to work, I don’t make excuses. We have with my wife two children adopted from Ethiopia. And one of my sons once asked my wife why she looked at me so much in the mirror. “Because daddy loves himself,” she replied. I am also very proud to have become, two years ago, the first white person to be nominated for the Black Hall of Fame. So my Ethiopian son says to me: “Dad, you have to work a little bit harder on your tan.

– It’s been many years in tennis… What do you like about the sport today?

– What I like is that today you can dock at all ports, there is no single way of playing. The one-handed backhand is back, you see more serve and volley. Today’s tennis forces you to be able to do a little bit of everything. And if you have the slightest weakness, your opponent will exploit it until he beats you.

– And what do you see that you can’t take anymore?

– Sometimes I see players who are losing 6-0, 5-0, 40-0 and I think it’s not over until it’s over. With the amount of money that is being handed out in tennis today, you should always perform, especially thinking about people who pay expensive entry fees and travel from far away to go to tournaments. What is expected of players then is to give their all, to sign autographs for kids who wait for hours, to participate in chats… Other than that, I think the sport is in good health. It could be better, yes, it can always be better. But we have to give everything to tennis, we owe it a lot.

– If you ask me, I think the two-handed backhand has more benefits. But look at Tommy Haas, what a beautiful one-handed backhand, and think about Jimmy Arias: if his father had let me train him with a two-handed backhand when Jimmy was a kid, with that powerful forehand he had, he would have won a lot more. When you work with young players you don’t have to tell them if it’s a two-handed or a one-handed, you have to see what they do naturally.

– What a player from the Bollettieri factory always had was a very powerful forehand. Why?

– Because that’s the weapon I think you have to have. When Jimmy Arias came to the Colony Beach Hotel in the late ’70s he was a tiny kid from New York. I put him on court 3 with a big guy, the way he hit it, the way he jumped! I said to myself: that’s a Bollettieri forehand. And Jimmy opened a new era of power in tennis. Grips are totally different today, a player can’t succeed with an eastern grip forehand. You need one that goes from western to semi western. The eastern or continental is for slice, drop or serve, but for a good forehand you need a strong grip.

– Federer and Nadal… are they eternal?

– Federer can be explained by the fact that he is a champion in everything he does. The strength of his family, what he does for the sport… Everything. And Nadal… Nadal is… an animal! An animal… What you have to respect about him is that, no matter where the ball is, he’s going to get there and he’s going to hit it.

– Do you like Nadal’s forehand? It’s not exactly the Bollettieri model…

– No, it’s not. But look at the results! Coaches shouldn’t make all players play the same. Look at Brad Gilbert, his shots were so horrible that I had to put on my glasses. And yet: number four in the world, winner over Boris Becker and Andre Agassi. The game may not have been aesthetically pleasing, but Gilbert was an incredible player. 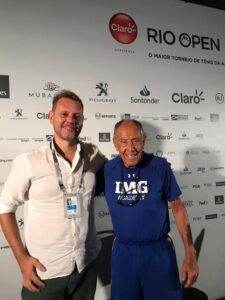 Nick Bollettieri and Sebastián Fest after the interview / RÍO OPEN

– You had the experience of working for a few months with Marcelo Rios, what was that like?

– Did he respect the coach?

– (he thinks) Yes, he was correct on the court. He respected the coach and he works a lot on the physical side.

– But you didn’t like his attitude off the court.

– No, I didn’t like it. And, actually, that attitude hurt him. He probably should have had more respect for the players on the circuit, for the kids who waited for hours for him to sign autographs. I think that was bad for his career, I think that, with a different attitude, Marcelo Rios could have been number one for many years.

– The problem then was in his attitude.

– It was right here (points to his head). It was in the way he approached life.

– She was very talented, but she couldn’t win a single tournament and had serious problems with her serve.

– What was wrong with her?

– Who was more talented, Kournikova or Sharapova?

– If we talk about natural talent, I think Anna. Maria is the perfect example of a hard worker. What she worked! She is pure business, she works as much as it takes. And her attitude is incredible, she doesn’t give up until she is defeated. But things were not easy for Maria, and she suffered a lot of injuries, four or five. She’s a girl who works really hard….

– Of the new generation, the one that is supposed to replace Nadal, Federer and Djokovic, who catches your eye the most?

– The German, Zverev. He should be less angry, he’s a young guy and he’s always looking for support among his own in the stands. But he has tremendous talent.

– What do you remember about Gabriela Sabatini?

– A beauty! How to deny that, beautiful and with beautiful strokes! Her whole style was beautiful.

– I think she probably could have forced more, attacked a bit more. Had she had a powerful punch, a big weapon, like a good right hand, she would have done much more.

– Well, he actually had an unusual weapon, his backhand.

– That’s right! Yes, that’s right. And let’s not forget that in those years there was Steffi (Graf).

– Like Sharapova, Sabatini had major problems with the serve. Is that shot so complicated, can’t it be relearned?

– It’s not about learning how to serve well. There are a lot of people who do it naturally… But I think if I had a girl today who was having trouble serving, I would cut her in half, instead of making her wait so long for the ball. I judge a player by two measures: the second serve and the return. That gives me a very clear message about the player.

Nick Bollettieri, in his later years

– Del Potro is a player with a good serve and a good return. How do you analyse him?

– He is different, that forehand that hits so far forward and away from the body! With the finish of the shot it almost looks like the Statue of Liberty, Del Potro is like the Statue of Liberty! And it’s not a shot that needs to be changed. And what a serve! He had injuries for a few years. And I wonder: should he have won or really won a lot of big tournaments? There’s Federer, Djokovic, Nadal… It’s tough. And he’s a very big, big player. In tennis, mobility is a very important thing. I think he hits his forehand at 175 kilometres per hour. The forehand is a very important thing in the game, but today, especially against players like Federer and Djokovic, you need more than just a big forehand and a big serve.

– Because he’s too big! When you’re almost two metres tall you need more than two big weapons. But his return to tennis is very good, it’s very good to have him back on the circuit.

– There are people who say that tennis matches last too long, that it’s not tolerable for television, that you have to shorten the game. Do you agree?

– First of all you have to say that people travel a lot of kilometres to go to Grand Slam tournaments, that they go there on their holidays. There are two ways of looking at it. Five sets is a long time, yes, but those who work very hard physically want to play best of five. There are pros and cons on both sides.

– And what do you think?

– That’s not an issue for me, you know why? Because whatever I say, 51 per cent will agree and 49 per cent will disagree. I leave it to the people to think what they want…