Steffi Graf forsakes her ultra-low profile to talk about the Ukraine, social media pressure and violence in U.S.

Steffi Graf’s life is extraordinary in more ways than one. In tennis, there are plenty of arguments for many to rightly claim that she is the greatest player of all time.  At the tender age of 19, she won the Golden Slam (the four majors plus the gold medal at the Olympic Games), something that no one else who has ever wielded a racquet can say.

But just as she was extraordinary in tennis, she is also extraordinary in life. In 1999 she announced she was retiring, two years later she married Andre Agassi in the United States, and today, based in Las Vegas, she’s not a mere witness to the world’s problems, she gets involved personally to help solve them.

“My goal is simply to give children their happiness back,” Graf, 52, stated in an interview with the German edition of “Vogue” magazine, talking about her worldview and the foundation she set up in 1998 “Children for Tomorrow”. 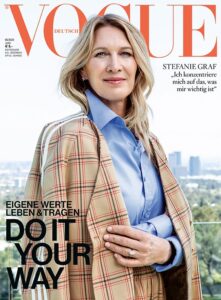 The cover of Vogue with the interview with Steffi Graf

You were extremely discreet, very low profile, the interviewer asks. Graf agrees but explains why this was the case during her best tennis years.

“It was not a decision I had to make, but something that reflected my personality. Basically, I had little interest in exposing myself, when I played my privacy was very important to me. It may have something to do with why I came to the fore at a very young age.”

Graf recalls, without going into detail, that she had complicated moments on a personal level in a career that led to 22 Grand Slam titles and a number one ranking for an unprecedented 377 weeks. Problems related to her father, Peter, for example.

“There were less peaceful times in my environment, but I always had a lot of support. You get close to people who think like you, who have similar values, and you learn to recognize and identify those people. Tennis meant that I was surrounded by a lot of people and developed  good radar to identify who was who.”

Graf recalls that she set up her foundation after becoming interested in the refugee crisis Germany and the work of advocates. She met many children and listened to their stories.

“It was such a mobilizing thing that I decided to get involved.” 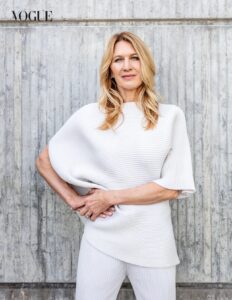 Steffi Graf, in the Vogue production.

Graf believes that society is much more open today to dealing with conflict issues than it was in the ’90s.

“Absolutely – she tells “Vogue” – this has changed a lot thanks to the media, things are documented differently today (…) For example, when you see images from Ukraine you don’t only see the destruction of the buildings, but also the people. You understand much better the impact on the souls of these people”.

Graf says, based on her experience, that she sees how “the children themselves want to do better.”

“My goal is simply to give them back their happiness. And they give a lot to us because they show a strength that is admirable.”

Social networks are, for the German, a dangerous terrain.

“It’s clear that the new generations grow up with them as a given, but to be communicating all the time, it’s almost obligation to do so… It becomes more difficult to stay focused on the essential, to have balance.”

“We constantly talk to psychotherapists who have confirmed that there are more and more children with psychological problems at a young age. We see it here in Las Vegas: violence in schools has grown, both among students and towards teachers. It’s scary. I don’t want to be so negative, but it’s increasingly clear that something is changing among children and adolescents”.