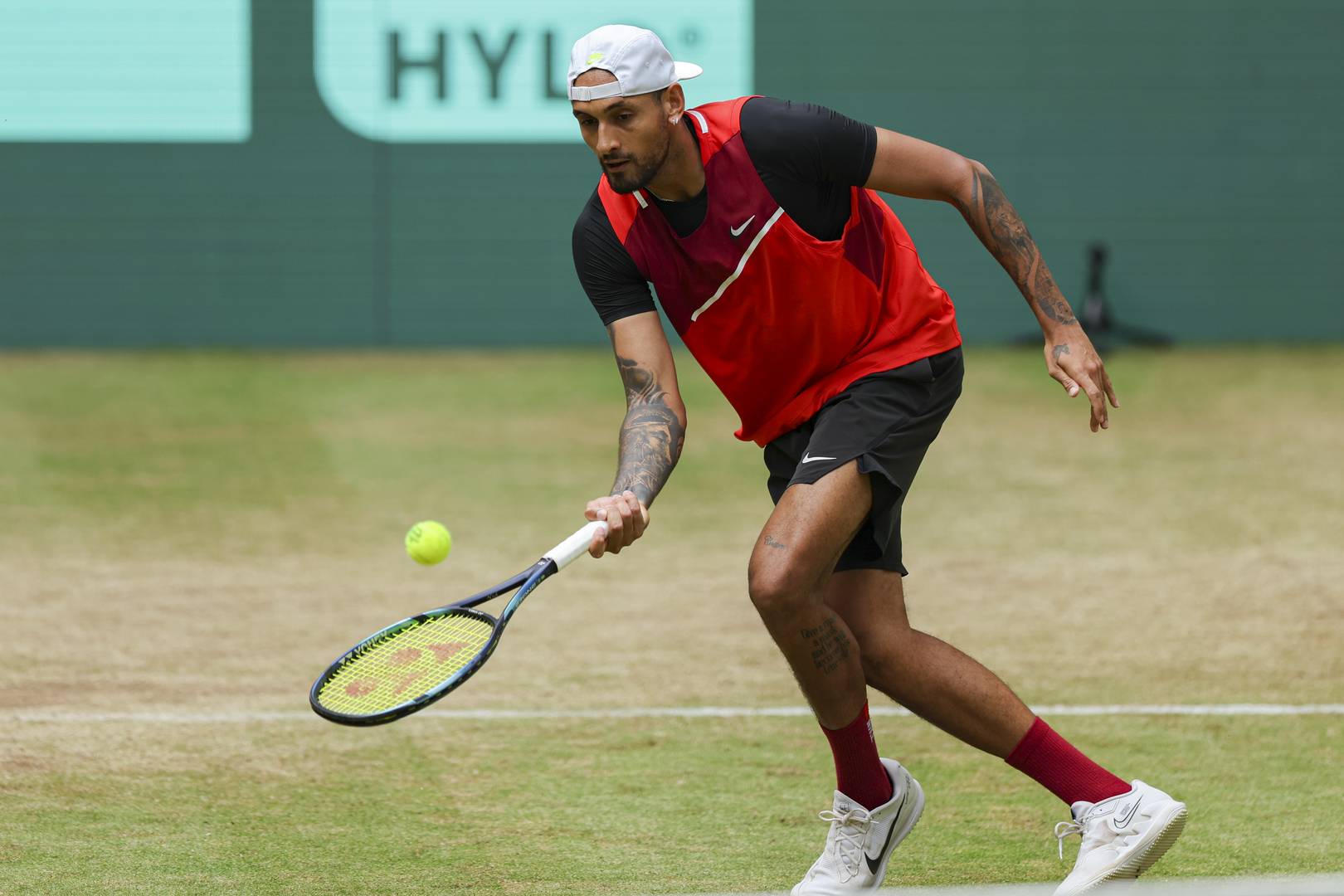 HALLE, Germany – Nick Kyrgios hits hard. Especially on his serve, the ball seems to travel faster than usual. He celebrates loudly when he hits a winner. He curses when the ball goes wide. And he throws himself to the ground when he wins a tiebreak.

Detail: it is only a practice.

Opposite him is a junior player with no pro ranking. By the way, is his namesake, Godsick, son of Tony, Roger Federer’s manager, and former tennis player Mary Joe Fernandez. Invited by the tournament to serve as a sparring partner.

No fans. No television. The show is not for anyone who paid a ticket. They don’t have access to the training sessions. Show is put for himself.

Some of his phrases, uttered at the top of his lungs, are remarkable. Others, sure are too, but they’re impossible to pick up for the spanish-speaker journalist, because of the Aussie’s tricky accent. Whatever he says, provokes smiles on the adjacent court.

Otherwise, he gets bored: “Usually I play tiebreaks or points out of the hand. I have to keep it fun. I can’t to feeding or things like that. Things excited to train. I can’t play tennis for more than two hours. Feels boring after that”.

Whether it’s before he takes to Wimbledon’s Centre Court, or at his lifelong home in Canberra, on-court training has to be a break.

But at the same time, it is an event with mostly local spectators and regional press, where the players and their teams and familes stay at the hotel on Roger Federer Street, just 10 metres from the courts. Not the craziness of a Grand Slam, with busy schedules and venues located in cities with millions of inhabitants.

A “refreshing” week, as Kyrgios feels it, where he brings the show what people paid to see. If Federer, the ten-time champion, the one who was expected to play when ticket sales started is absent, then the people look for Kyrgios.

They want fancy shots, underarm serves and flat forehand passings that fly like rockets. They also want, even if they boo and jeer, controversy with the umpire, smashed racquets.

When Daniil Medvedev plays, the stadium is not full. And he just regained his world number one status in Halle. When 27-year-old Kyrgios plays, everyone is on their seats.

With his electric tennis and the desired blend of skill and sense of entertainment, he confesses: “I played so well that I almost felt bad”. The Spaniard Pablo Carreño Busta suffered that time. Kyrgios scored 39 winners and only four unforced errors.} 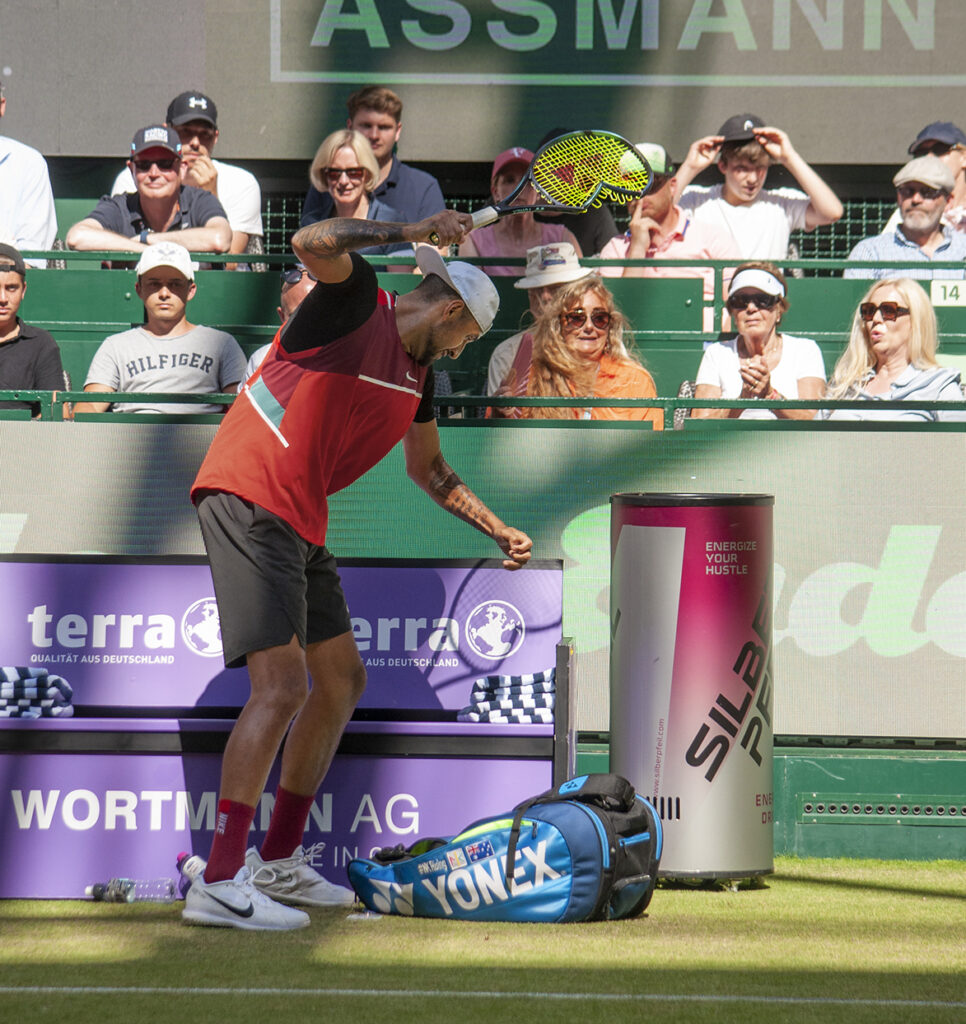 Post pandemic, Kyrgios has found the formula: quality over quantity.

Apart from those who are injured, or who have been excluded from certain competitions due to vaccination rules, the Australian is the tennis player with the fewest tournaments played in 2022.

To the Grass season, he arrived having played only four events. Stuttgart was his fifth. Three times less than the average of the top 100. And yet, after making the semi-finals in Halle, he will be ranked #45 this Monday. Ranking will never matter to him, or, Would any tournament deny him a Wild Card if needen?

“Another reason Im proving to people that you can do it at your own way. I’m proud of how hard I work when im not on tour. I’m at home with my family, I train with guys that don’t even have a ranking and then I come here, and in the biggest stages I beat players in the top 3, top 5 in the world”, he said after beating greek Stefanos Tsitsipas.

Another of the Kyrgios Formula: swap the european clay season for Australia’s east coast. Time with family and friends, rather than socks stained with orange dust. Sunbathing on the terrace of his new $1.6 million penthouse, rather than on a clay court.

If not in the spectacular Sydney suburb of Kensington, where he lives with his girlfriend Costeen Hatzi, whose name got inked in his left thight, then in his hometown Canberra. As he has described it, his favourite site in the world.

Places where he escapes the mental toll of touring Europe for three months. The clay is incompatible with his tennis. He doesn’t need it. This year he played the Men’s Clay Court Championship in Houston because he was already in the United States. But travelling to Europe? Only for the grass.

Not like some of his other colleagues he doesn’t even know.

“European players can play clay court all year around and finish like 70 in the world. And they don’t even have to leave. Where an Australian player has to travel six months a year and not see his family, not see his friends. There are guys who you look at their record on grass and hard, and hopefully they won a couple of matches. How can there be top 100 players who don’t know how to play two out of three surfaces? It doesn’t make sense”. 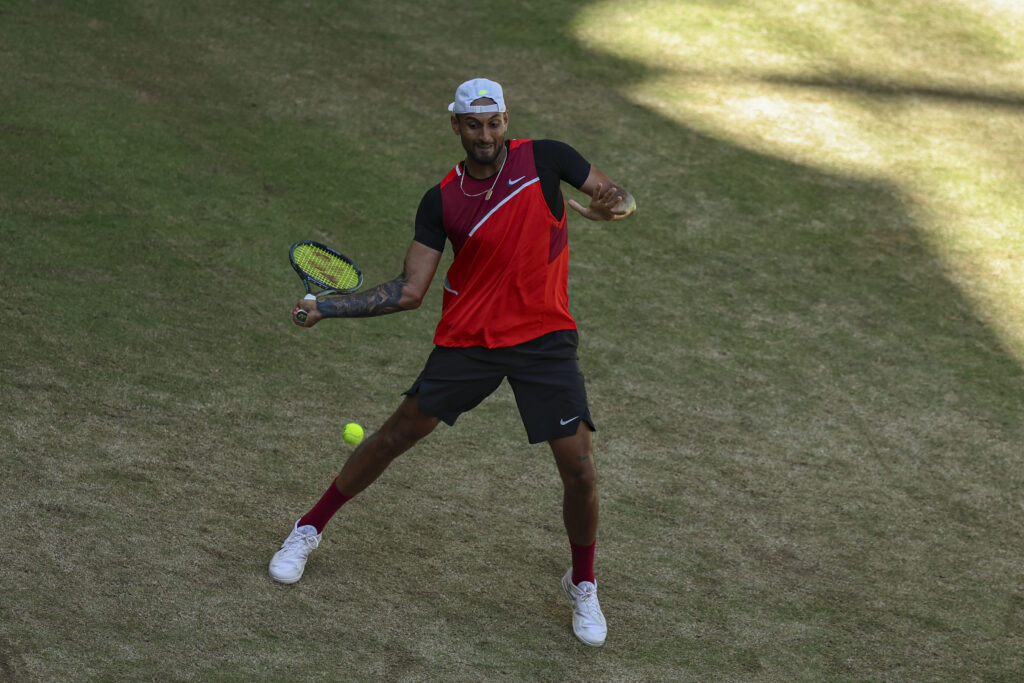 Show, his remedy for tennis

“Tennis has been so flat for so long. I literally do an underarm, nothing too crazy, and the crowd goes crazy. Tennis is so used to seeing the same thing all the time. When someone like me comes along and does things differently… that’s all it takes”.

Kyrgios plays for the gallery.

Martin Campodonico (25), an Argentinian tennis fan based in Ireland, enjoyed it from the stands. He had scheduled a visit to Halle to watch Federer. When the Swiss confirmed that he would only return to Basel in October, he posted the tickets on the resale. Until the organisers invited the Australian: “He is enough to motivate me to come here. I always wanted to see his show, which is more than a tennis match. He has fun and spend a good time, he’s happy with what he does. Sometimes it looks like he’s stupid because of the way he looses his head, but in reality he has a lot of charisma. He’s genuine and that’s what tennis fans like me really enjoy”.

That’s the way Nick Kyrgios has always been. A man of opposite poles: “I’m very emotional. I’ve always been like that. Some matches I was tanking, some matches I was winning. The reason why is so hard to change my behaviour is because I’ve been winning so much in every age level, 12, 14, I was #1 junior in the world. Then at this level, I’m still winning, and people are like, ‘You have to change your behaviour,’ and I’m like, ‘wow’”.

Kyrgios, takes a pause from his always fast-paced speech.