Rios was “disrespectful” – Why Juncheng Shang threw away a number one

MELBOURNE – Juncheng Shang had the luxury of dismissing a world number one. Marcelo Rios had a fleeting experience as coach of the young Chinese, who in Australia, explained his dismissal: “He was disrespectful”.

“For me and my family, the most important thing is to be a good person, to respect others, be disciplined. That’s the main thing I want to show on and off the court, and with Marcelo I don’t think it was 100 percent expressing the things we wanted,” Shang told CLAY in Melbourne Park.

The U.S.-based Chinese is, at 17, the youngest player in the men’s singles draw at the 2023 Australian Open. He is also the best on the planet among his age group. This Thursday he overcame the qualifiers and put his name in his maiden Grand Slam appearance.

An emerging career whose first success had to do with Marcelo Ríos.

The former Chilean tennis player trained Shang two months before the Asian tennis player’s family fired him without giving him reasons: “I mean, he was very nice to me and hopes the best for me, but I don’t want to give the details of what really happened.”

Under Rios’ regime, Shang won his first Challenger, reached another final and climbed 167 places in the rankings, but it all came to an end after two months of work.

The youngster does relate that he felt there was a lack of naturalness: “There was no natural feeling at the end. We started very well winning in Lexington, which was a huge confidence boost. To have had a former world number one is very special, it was a very good experience, sadly it didn’t work out in the end.”

Ríos was called in to train the Chinese and soon became very enthusiastic. “At night I wake up about five times to go to the bathroom and I start thinking about what I can do better. I start looking for ideas and I stay there for a long time,” he told La Tercera in July. He confessed that he had never been so impressed by watching someone play. So, he set out to travel the whole year as his coach with the aim of making him top ten before he turned 20.

After being fired, Ríos criticized Shang’s way of working, as he told journalist Carlos González “He plays very easily, but he doesn’t make an effort. For me, a professional player trains two and a half hours in the morning and two and a half hours in the afternoon, plus physical training. Him, two hours, wakes up at 12 o’clock in the morning… They have another culture. Any pain, we stop. The guy goes five steps forward and ten steps back.” 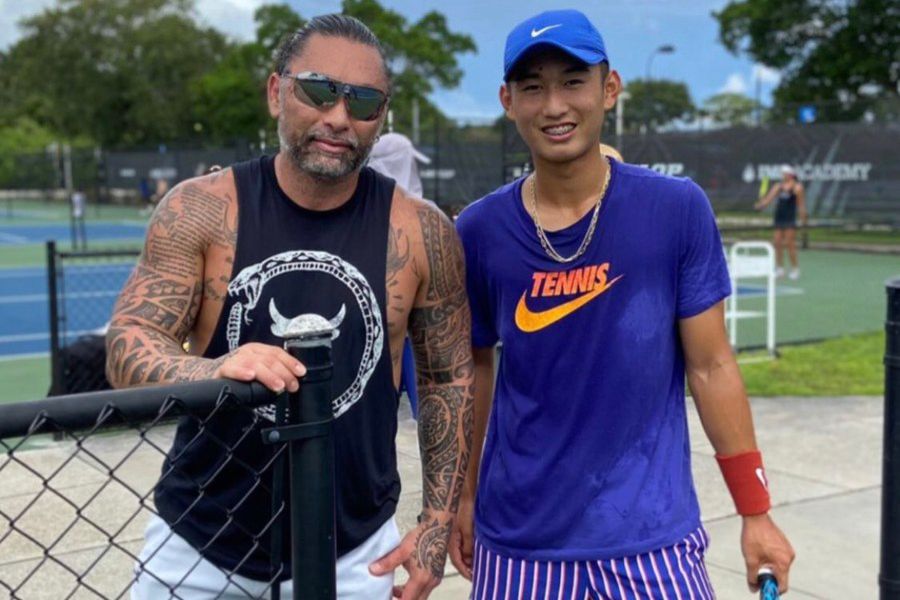 Marcelo Ríos and Jerry Shang, during the week they trained in IMG academy // J. YAN

Today Shang is on trial for the Australian tour with Dante Bottini, former coach of Kei Nishikori and Grigor Dimitrov.  “The truth is that together we have trained in double shifts. He has been very willing to work. It could have been different before, I don’t know, but with me he trained quite hard, quite well,” the Argentine coach tells CLAY.

“I don’t like to give numbers or anything, but I see a lot of potential in him, he understands the game very well, he is quite disciplined from what I’ve seen and I notice him with a lot of desire,” Bottini adds.

Jerry, (Shang’s western name) raises his arms and smiles after the photographer in the press room asks him about the celebration he would do if he wins a Grand Slam. Now the portrait has a more interesting component than the simple photo sitting in a chair.

“The star of the future? I’d leave that to the people that watches tennis, to debate about that,” says the Chinese “I’m just learning with every match.”